Employee engagement – including the silent stake-holders

Employee engagement – including the silent stake-holders 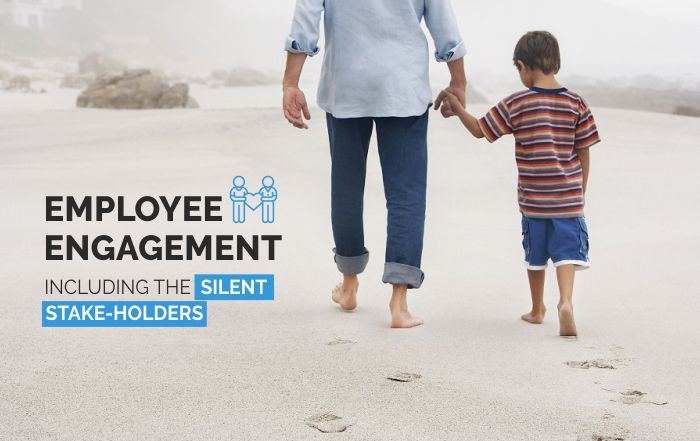 Today I got a pleasant surprise as I was finishing my day … One of my colleagues who was part of my team in a company that I left couple of years back called me out of the blue and said her father would like to have a word with me … It was such a pleasure talking to the man well into his nineties … the story goes a few years back… I needed someone to relocate from Headquarters to our office at Hyderabad … the person I had in mind was willing to take up the challenge … only problem – she stayed alone with her 87 years old father…. One day she came back with enthusiasm saying her father has encouraged her to take up this assignment… I still was skeptical keeping in mind the adjustments the octogenarian (I don’t dare to call him an old man!) had to undergo … Well the lady finished her assignment successfully and came back after two years … I was the most relieved man …. Intuitively I wrote a letter to her father saying his magnanimity of undergoing inconvenience and adjustments helped us to tide over a problem at hand …. Came back a smart reply, saying that he was happy it worked, with an invitation to have a cup of tea with him…. I could never forget the chat I had with him…..today when he called me, he said he just felt like talking to me as he remembered our letters exchange and the chitchat….in my life, moments like these are priceless! I always carried a guilt whenever I knew I was dipping into resources of people who did not owe me or the company a penny!!

.. We talk about employee engagement and managing different stakeholders’ expectations in corporate life… sometimes the most important stakeholders are forgotten …. The family! In today’s world of 24 x 7 we live so much on the time borrowed from our dear ones that it is important to take cognizance of that. It is not only the time that we borrow from them but it is also the stress that we carry home – none of which is of their doing but they still pay for it!

What do organizations need to do – well a few things – leaders need to have discipline to put premium on the personal time they borrow from their teams – it is not a right but it is a debt which one should keep as low as possible ….we sometimes give it a tricky twist of judging some-one’s commitment on ‘sacrifices’ made…. Well stupid folks can always do these sacrifices continuously but intelligent ones will ask serious questions about the real need to do these gimmicks … in a world that pays more and more respect to the results such gimmicks will only deliver burnouts!

Other aspect which organizations need to do, is to show the gratitude to those who deserve it! Some of the organizations are really doing a smart work of letting families / near ones know about the benefits that they have received due to some of the sacrifices…. Trick is to let the families know the value of the time that is borrowed from them … At least the families know that time lent by them is put to some good use …. I have seen bright smiles on the faces of near ones when the organizations have reached out and said a genuine “thank you” …. Believe me it does not cost much…..provided these touchpoints are genuine!! The only word of caution …. It is not some kind of trick to borrow more time from families … the first rule of keeping that debt as low as you can still applies….

Lot of times people who favor these “sweatshops” in corporate world argue that they are just keeping people on the toes so that there is no laxity in the system… my question to them is very simple … how do you feel to work for someone who genuinely cares and respects the interest of your family …. Well, if you feel great working for such people, so it the case with everyone …

It is a matter of conscious thinking about your teams as a “whole Human Beings” and not treat them as “resources” …. By the way I am still searching for the person who coined that term to describe people, would just love to have some target practice with a gun in my hand!!

About the Author: admin